It’s not often that a long established radio station causes headaches with Studio to Transmitter Links (STLs). Especially stations that have been on the go for 40 years and remained in roughly the same location for most of that time.

However, NHR did just that. They currently use an old Post Office line to carry their programs between the studios at the Queen’s Medical Centre and the City Hospital. A distance of about three miles as the crow flies.

Now, when we say old fashioned line, we really mean it. This is the same sort of line commercial radio stations of the 70s and 80s used to use for OBs. It’s literally balanced twisted pair with a few amps and transformers. In the past, you could get the line re-patched at the exchange to carry content back from concerts and sports venues.

All sounds great but they’ve been running into problems. Firstly, the line costs a fair chunk of change. Considerably less than Kilostream will cost you but still a lot of money to a charity that does a lot of great work to entertain patients (it regularly comes top in audience figures in the hospitals).

The other problem comes from a mistake a little while back. BT were removing old kit from the exchanges they didn’t think was in use any more. Guess who’s line was among the kit. They were quick to get the station back on air but it did remind us that NHR’s operating a type of line generally taken out of service decades ago.

That prompted us to look at alternatives. First of which is rather ubiquitous among community radio stations (mainly due to its low cost and ease of setup) – the WiFi/microwave link. Something that should be entirely possible with the sites only three miles apart. Until you take the terrain into account that is.

Nottingham is basically built on a ridge that splits the city in two. One of our hospitals is on one side. The other hospital happens to be on the other side. So, it’s not looking good for a WiFi/microwave link unless we get very lucky.

A few minutes in Radio Mobile confirms that we’re not lucky: 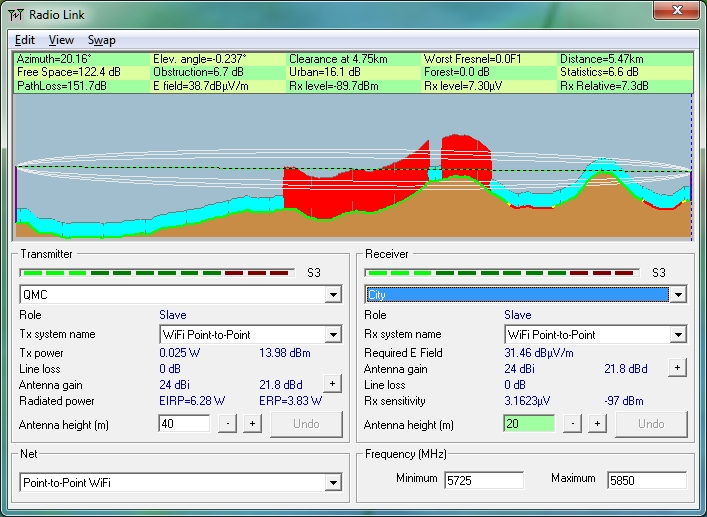 We’d need to build a 20+ metre mast in the car park of the City Hospital site to even have a chance of making the link work. I doubt this is something we could get away with without alerting the NHS trust. So, we decided to take a look at what would happen with a Band 1 FM link: 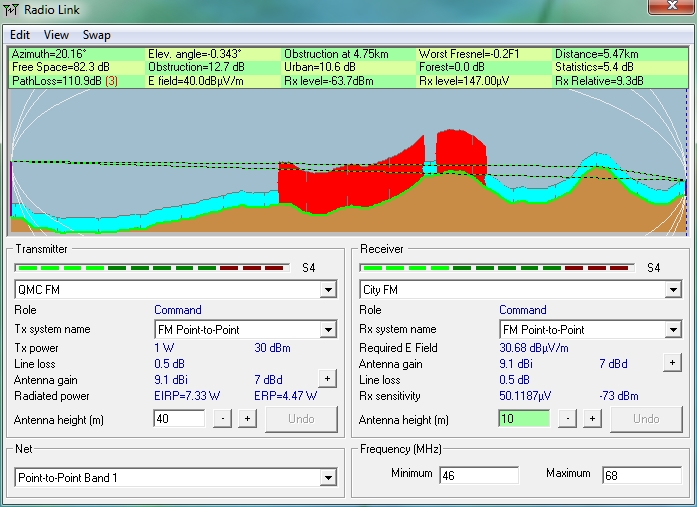 It claims we can get away with an antenna height of 10 metres which might just be the ticket on a three story building. However, it’s not great. The predicted signal is ropey at best and relies on some high gain antennas accurately lined up.

At this point you’d probably look to give up and go home. We’ve decided to go down a different route: DSL. Yes, it’s sending broadcast audio over the public internet but it costs far less than their current line and passes as reasonable reliable nowadays. Especailly with the low bandwith CODECs like AAC+ that are available nowadays.

The plan is to install a Raspberry Pi running LiquidSoap. This will run both the stream and the backup audio. On top of that, it’s less than £30 to replace the whole lot if it fails.

It’s a big risk but we’ll tell you how it goes. Well, once we get in the install done. But for now, you can look at the guide we’ve made to configuring a Raspberry Pi to carry your broadcast audio.